TITLE: CERN and the Profoundly Unknown 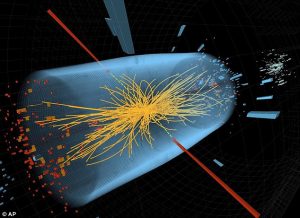 In 2012 two of the major experiments at the Large Hadron Collider at CERN discovered the Higgs boson. The two experiments are called “CMS” and “ATLAS” and I work with the ATLAS experiment. This was the last major prediction of the “Standard Model” of particle physics.

The accelerator though, has not stopped running since then. And in fact the energy of the beams has almost doubled. So what is it that we are doing? And why are we doing it?

In this presentation I hope to explain why we are continuing to look at this data through the window of my own research efforts which do still centre around the Higgs boson. I will explain about the Higgs and how we search for it. I will then explain why it is important to now search for cases where we produce two or more Higgs bosons at the same time. I will show the results we have obtained so far and then also talk about the immediate future of the Large Hadron Collider and where this kind of fundamental physics goes from here.

is a professor of physics at the University of Oxford and a Fellow of Lady Margaret Hall. His research is in particle physics and focusses on discovering new particles and forces at the Large Hadron Collider at CERN. Prof. Huffman’s current research is focused on the search for events that occurred within the LHC which produced two Higgs bosons…so-called “diHiggs” events.

Prof. Huffman received an undergraduate degree in Electrical Engineering at the University of Nebraska in the United States, the University that is in the state where he spent his childhood. He worked as an apprentice engineer for General Motors corporation as a co-operative student in order to obtain sufficient funds to top-up his scholarships for his undergraduate degree. He obtained a Fellowship moved to studying Physics in graduate school at Purdue University in Indiana where he received his Masters degree and then, in 1992, his Ph.D. in Physics.

From there his post-doctoral career was as a researcher in Particle Physics based at the Fermi National Accelerator Laboratory just outside of Chicago Illinois but working for the University of Pittsburgh. In 1997 he accepted a “Research Officer” position at Oxford and came to the UK, but one year later a full lectureship opened up to which he applied and won in 1998 in association with Lady Margaret Hall, where he has stayed first bringing Oxford into a collaboration at Fermilab and then joining the ATLAS experiment at CERN.